BILLS Update: Spiller one of only two 1st round picks yet to sign

The Bills are in the back of the pack in the NFL again…in terms of signing their 1st round draft pick that is.  Of all the first rounders, only the 6th overall pick, Russell Okung, has yet to sign a deal and being practicing.  The Bills have been among the slowest to sign their first round picks in recent years, most notably last year when Aaron Maybin’s holdout caused him to miss several weeks of practice leading up to a completely forgettable rookie season. 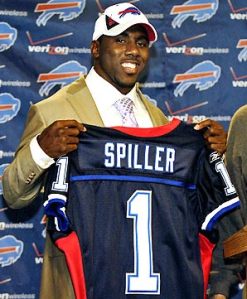 Gailey conveyed his disappointment with the delay in signing Spiller, noting that his absence benefits no one. “It hurts,” Gailey said of the holdout. “He did a great job in (organized team activities) and minicamps but being here now is a different game. It doesn’t help anybody — doesn’t help him, doesn’t help us, and we hope it gets resolved as soon as it possibly can.”

With no alternate explanation offered by One Bills Drive, one can only assume that the Bills struggles to sign their most important draft picks underscores their reluctance to spend money on talent and make team-first decisions.  The culture of the Bills organization over the past 20 years has proven that it is not conducive to producing winning football teams and this is merely another example of that.

Covering the latest news on all Buffalo sports and offering insightful commentary.
View all posts by B-lo Blogger →
This entry was posted in Uncategorized. Bookmark the permalink.